AZARGA METALS CORP. ("Azarga Metals" or the “Company”) (TSX-V:AZR) reports that it has received a series of reprocessed ground magnetic survey maps generated by an independent geophysical contractor that show a northern extension of the previously recognized strong magnetic anomalies in the north-west part of its Unkur Copper-Silver Project. These new maps, covering approximately 11 square kilometers, were generated from data collected by Azarga Metals field crews in the 2016–2017 field season. At that time only about 60% of this data, in the west-central part of the property, was used to focus the 2017 drilling campaign which culminated in the publication of the maiden Inferred resources and Preliminary Economic Assessment for Unkur copper-silver mineralization (see news release 15 October 2018) over the drill-tested strike length of 3.1 kilometers. The newly processed magnetic data has included the remaining 40% that covers an area in the north-west part of the property, and this is the area that shows the northern extension of the large-scale magnetic anomalies (see Figure 1 below).

Michael Hopley, President and CEO of Azarga Metals comments “The results of this reprocessed magnetic data are particularly encouraging because there is a strong obvious association between the magnetic signature and position of the known copper-silver mineralization at Unkur. This new information will be used to locate some of the drill holes on the upcoming drilling program which is planned to start later this year.”

The independent geophysical contractor cleaned and corrected several components of the raw Azarga Metals magnetic data but most importantly using a “reduction to pole” (“RTP”) simulation in which the data is transformed into a model of the magnetic intensity as if the inducing field was vertical which helps to center the magnetic highs and lows over the source body. The known copper-silver mineralization at Unkur appears to be strongly associated with the gradient zones on the eastern side of the boundary between magnetic highs and lows. As a result Azarga Metals technical staff interpret these new magnetic maps as showing a potential northern extension of the mineralized envelope for an additional 1.5 kilometers at Unkur North (see Figure 1 below). 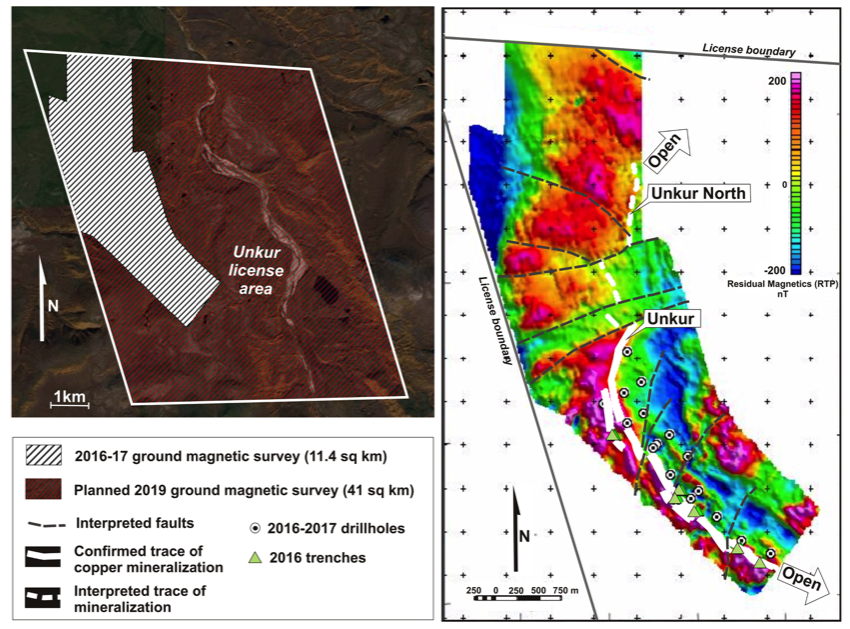 Figure 1. Map showing the extent of the 2016-2017 ground magnetic surveys and an RTP residual magnetic image of the north-west part of Unkur Copper-Silver Project.

Azarga Metals’ President and CEO Michael Hopley, a Qualified Person as defined by NI 43-101, has reviewed and approved the exploration information disclosure contained in this Press Release.

Azarga Metals is a mineral exploration and development company that owns 100% of the Unkur Copper-Silver Project in the Zabaikalsky administrative region in eastern Russia. Unkur is a copper-silver discovery of global significance. On completion of a first phase of exploration in 2016-2018, the Company reported an Inferred Resource of 62 million tonnes at 0.53% copper and 38.6g/t silver for the project (see news release 15 October 2018). The Resource remains open in both directions along strike and down-dip.