AZARGA METALS CORP. ("Azarga Metals" or the “Company”) (TSX-V:AZR) is pleased to announce that results from its reconnaissance geochemical exploration program have shown previously unknown areas of copper and silver mineralization on both the eastern and western limbs of the Unkur syncline on its 100% owned Unkur Copper-Silver Project (the “Project”) located in Eastern Russia.

Dr. Alexander Yakubchuk, VP Exploration said: “These results confirm that mineralization at Unkur is more widespread than previously thought. In particular, copper and silver have now been identified on both the eastern and western limbs of the Unkur syncline. This is not surprising given the similar geological setting and scale of the nearby giant Udokan copper deposit where mineralization occurs on both sides of a synclinal structure. These new results will focus future exploration efforts to enlarge the Unkur deposit.”

The reconnaissance geochemical exploration field operations took place during October and early November 2020. The object of the program was to identify new areas of copper and silver mineralization outside of the known area of recent drilling by taking lithochemical samples just below the surface over widespread areas of the property and analyzing the -1mm fraction. Due to frost and snow on site, the original design of the program was reduced but despite this, 180 rock-chip samples and 28 channel samples were taken at 6 locations.

The results of the channel sampling showed significant zones of copper mineralization at surface on the east side of the Kemen River (known as the Kemen area) as well as areas on the southwestern side of the property (Unkur SW) – see the table and map below.

In the Kemen area, several lithochemical samples showed more than 0.05% copper in three anomalies extending over strike lengths of 2 km, 1.1 km, and 0.9 km (using the >25ppm Cu value), possibly at different stratigraphic levels. Copper mineralization in outcrops was also found at several locations on which channel samples were taken (see Table 1 below). This is an important finding and confirms, for the first time, that mineralization is present on the eastern limb of the Unkur syncline.

In addition, new mineralization was discovered over an area of 250x160 m at Unkur SW in four closely spaced outcrops on which channel samples were taken (see Table 1). This mineralization appears to be stratigraphically below the main Unkur mineralization and implies a second perhaps parallel zone of mineralization to the known body hosting the current resources at Unkur.

Table 1 shows results of channel sampling from the discovered outcrops at Kemen and Unkur SW with >0.1% Cu values. From experience the Company believes that the copper values in the channel samples are more indicative of underlying grade due to the greater mobility of silver over copper at surface. 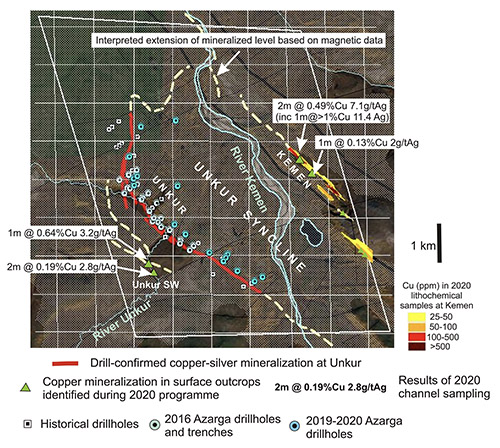 Azarga Metals’ independent consultants continue to work on an updated Mineral Resource estimate for the Project. The updated estimate will include data from the 15 drill-holes (5,572 meters) drilled in the 2019-2020 drilling program, which significantly extended the known mineralized strike on the western side of the Project. The results of the updated Mineral Resource estimate will be published when finalized.

Azarga Metals is a mineral exploration and development company that owns 100% of the Unkur Copper-Silver Project in the Zabaikalsky administrative region in eastern Russia. On completion of a first phase physical exploration program in 2016-2018, the Company estimated an Inferred Resource of 62 million tonnes at 0.53% copper and 38.6g/t silver for the project in the report entitled “Technical Report and Preliminary Economic Assessment for the Unkur Copper-Silver Project, Kodar-Udokan, Russian Federation” dated effective August 30, 2018 authored by Tetra Tech Mining & Minerals. The Resource remains open in both directions along strike and down-dip.