Acquisition of 60% of Large Scale Unkur Copper-Silver Project in Russia and C$2.0M Fundraising

EUROPEAN URANIUM RESOURCES LTD. ("EUU" or the "Company") (TSX-V:EUU) has agreed to the terms to acquire an initial interest of 60% in the Unkur Copper-Silver Project located in eastern Russia (the "Unkur Acquisition""). In connection with the Unkur Acquisition, EUU intends to raise C$2.0 million through a private placement of common shares (the "Private Placement") and consolidate its shares on an up to 10:1 basis (the "Share Consolidation"). The Company has entered into subscription agreements with cornerstone investors for C$1.5 million of the planned Private Placement. Following the closing of the Unkur Acquisition and ancillary transactions, EUU intends to change its name to Azarga Metals Corp.

Dorian (Dusty) Nicol, President and Chief Executive Officer stated: "This acquisition will allow the Company to proceed with exploration of an exciting new copper and silver project in a favourable location. We are preparing to conduct our first drilling program at Unkur in the fall of this year." He then went on to say: "With our low overhead cost and current low cost of drilling in Russia, we currently anticipate the fundraising to sustain active exploration at the project for a period in excess of two-years."

Sediment-hosted copper and silver mineralization has been identified across the 5,390 hectare Unkur Project license area, in outcrops, trenches and by diamond drilling over a strike length of approximately five kilometers.

Diamond drilling was conducted at the Unkur Project in 1971 and 1978, with eight holes intersecting high-quality copper mineralization. The deepest mineralized intersection was at a relatively shallow down hole depth of 242.4 meters.

Limited work has been undertaken on the Unkur Project since the late-1970s.

The Unkur Project was successfully acquired through a Russian Government public tender by Azarga Metals Limited ("Azarga Metals") following extensive preparatory work by that organization including data collation and prospecting at the site over a period in excess of three years.

The current mineral license for the Unkur Project covers mining of copper, silver and associated metals and is valid until the end 2039.

Given extensive historical geophysics and some drilling, EUU management considers the Unkur Project a drill ready project that is highly prospective for the delineation of a shallow deposit of substantial copper mineralization with associated economically important grades of silver.

The Company believes there is good potential to delineate a substantial economically viable copper-silver deposit at the Unkur Project. EUU's initial target is for the delineation of 20-40 million tonnes of mineralization at 0.6-0.9% copper and 60-80g/t silver. The geological style of this type of sediment hosted copper deposit around the world is known to have potential to host hundreds of millions of tonnes of mineralization. In line with this, management believes there is potential to discover a very large deposit within the Unkur Project license area. It should be noted with respect to the Company's initial target that the potential quantity and grade is conceptual in nature, that there has been insufficient exploration to define a mineral resource and that it is uncertain if further exploration will result in the target being delineated as a mineral resource.

The Unkur Project consists of one 5,390 hectare license that lies in the Kalarsky district of the Zabaikalsky administrative region of Russia, approximately 380 kilometers north of the China-Russia border and 15 kilometers to the east of Novaya Chara town.

A power line crosses over the Unkur Project license area connecting to a high-voltage sub-station at Novaya Chara with a capacity of 200 megawatts.

The Unkur Project sits in a broader district known for its copper and precious metals mineralization. It is within 20 kilometers of Udokan, which is reportedly one of the three largest undeveloped copper deposits in the world today. 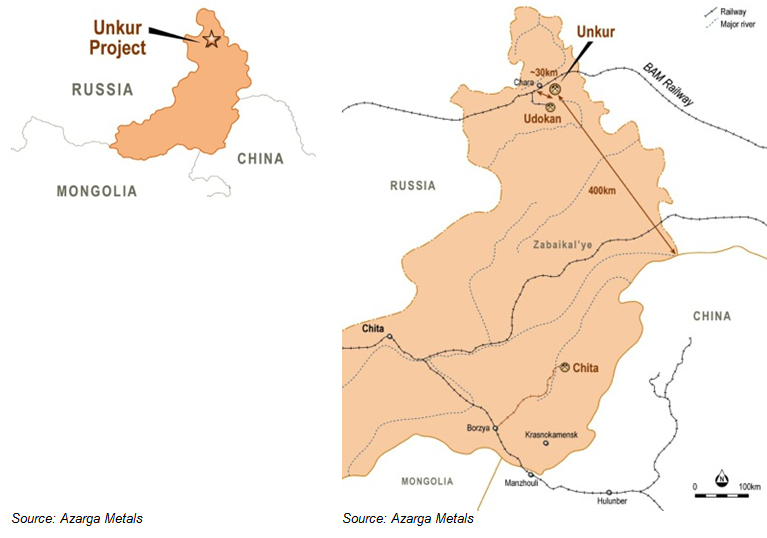 Copper mineralization was first discovered at the Unkur Project in 1962. The vast majority of recorded exploration at the project occurred between 1969 and 1978. The work in this period included approximately 6,700 cumulative linear meters of diamond core drilling undertaken in 1971 and 1978, and almost 40,000 cumulative cubic meters of trenching.


A total of 11 composite samples were made from mineralized core sample duplicates to determine grades of associated elements and these returned an average grade of 67.4g/t silver, with a minimum of 11.2g/t silver and a maximum of 164.6g/t. It should be noted that composite samples are selective samples and are not representative of the mineralization hosted on the property.

Ground geophysical surveys were carried out in two major campaigns at the Unkur Project. Methods included electric logging (induced polarization, dipole electric profiling), time-variable natural magnetic field, magnetic and gravity survey. Data cross-referenced with outcrop samples and drill hole core determined that the geological unit under the copper-bearing horizon was highly pyritized and this became a geophysical marker for identifying the copper-bearing horizon. The survey data showed that zones of conductivity and high polarizability are confined to the horizons of copper-bearing sandstones. 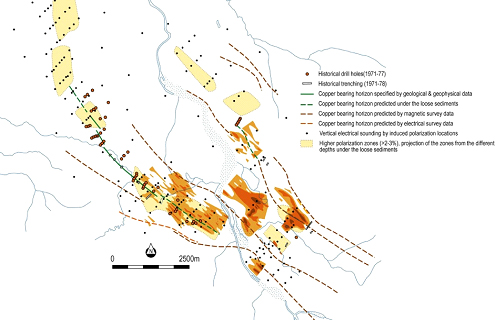 No meaningful exploration activity has taken place on the Unkur Project since 1978. However, in 2013, Azarga Metals's technical team confirmed the presence of copper-silver mineralization through five rock chip samples taken at the site, which tested 1.8% to 6.1% copper and 49g/t to 230g/t silver.

Azarga Metals acquired the Unkur Project in mid-2014 and subsequently performed additional surface prospecting and a technical review. In early 2015 a 350 kilogram sample of near-surface oxidized ore was collected for metallurgical testing by SGS Vostock (a member of the SGS Group).

The sediments of the Udokan series were deposited in a shallow marine environment. In ascending stratigraphic order, the formations of the series are named as the Ikabyinskaya, Inyrskaya, Chitkandinskaya, Alexandrovskaya, Butunskaya, and Sakukanskaya. The overall thickness of the series is 5,350m.

The copper-bearing horizon is confined to sediments of the Lower subformation of the Sakukanskaya formation. This subformation is a 500 meters thick package of alternating pinkish-grey medium-grained sandstones and grey to black siltstones. 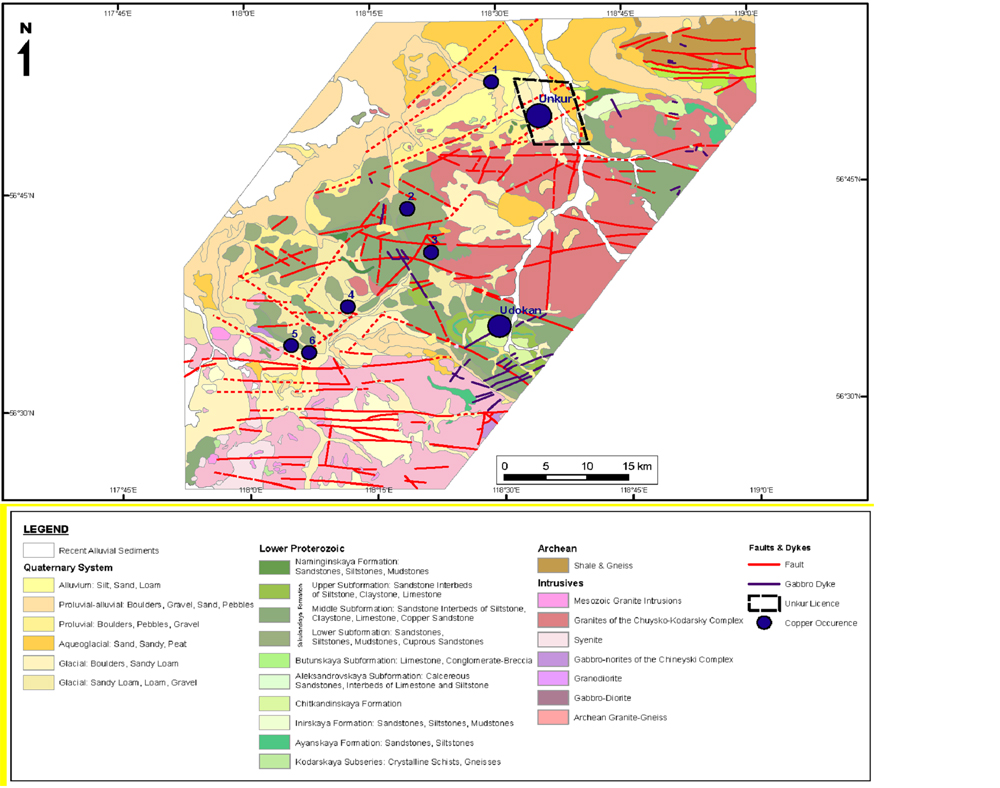 The copper-bearing horizon has been traced along the strike for 4.6 kilometers, including a 3 kilometer length of drill hole and trench intersections. The maximum drill hole intersection depth is approximately 240 meters. The thickness of the horizon ranges from 12-50 meters.

From geophysical methods, the copper-bearing horizon has been traced under moraine sediments for 4 kilometers and is characterized by high polarizability. Geophysical results and the presence of copper oxide minerals among deluvial sediments are a possible indicator of the location of the horizon on the northeast limb of the Unkur syncline where limited drilling and trenching has taken place.

The oxidised zone is poorly developed, to a depth of 5-10 meters from surface. Copper oxide minerals are also observed at deeper levels in fractured zones.

In early 2015 a 350 kilogram sample of near-surface copper oxide ore was collected from the Unkur Project for metallurgical test work and sent to SGS Vostok (a member of the SGS Group). The grade of the sample averaged 1.31% copper and 28.2g/t silver. Hydrometallurgical processing allowed copper recovery of 95.9-98.4% and recovery of silver into cyanide solution was 96%.

The scientific and technical disclosure in this news release was reviewed and approved by Dorian (Dusty) Nicol, the Company's President and CEO and a Qualified Person as defined in NI 43-101.

On closing EUU will issue the Selling Shareholders 15,776,181 common shares, which will be approximately 37% of the number of shares as constituted after closing the transaction, the Private Placement, the Debt Settlement and the Consolidation (the "Consideration Shares"). In exchange for the Consideration Shares, the Selling Shareholders will transfer 60% of the issued shares of Azarga Metals to EUU. The Consideration Shares will be restricted from trading for two years from issue date. EUU will be assigned existing loans made by the Selling Shareholders to Azarga Metals of up to US$800,000 that bear interest at the rate of 12% per annum, which can be capitalized or paid in cash (the "Debt"). The Debt must be paid within seven years from closing. The Selling Shareholders will retain a 5% net smelter return royalty ("NSR") and their combined 40% interest in Azarga Metals will be free carried to initial production and profitability subject to the Put/Call Options. EUU will have the right to buy back up to 2% of the NSR at a cost of US$5 million per percentage point so that upon paying US$10 million the NSR will be reduced to 3%. In addition EUU will make deferred cash payments to the Selling Shareholders of US$1,680,000 (the "Deferred Cash Payments") beginning with US$80,000 payable on 1 June 2017, with a payment on each annual anniversary that increases by US$80,000 a year so that the final payment of US$480,000 will be due on 1 June 2022. In the event of a change of control of EUU, the Debt and Deferred Cash Payments will become due and payable within five days.

If at any time, a Resource (adding Measured, Indicated and Inferred of all combined deposits within the Unkur Project area) is estimated to contain copper and silver to the equivalent of 2 million tonnes or more of copper where Measured plus Indicated Resources comprise at least 70% of that estimate, taking the value of silver as copper equivalent (the "Bonus Payment Threshold"), an additional US$6,200,000 will be payable to the Selling Shareholders within 12-months notice that the Bonus Payment Threshold has been met.

Three of the selling shareholders of Azarga Metals have agreed to loan EUU up to C$100,000 with a 12-month term and interest at the rate of 15% per annum to facilitate the various transactions.

To support the application for approval with the Exchange, the Company will provide an independently prepared Geological Report on the Unkur Project. It is expected that this report will recommend a first phase drill program at the Unkur Project with an estimated budget of US$450,000 to US$500,000.

The Board of Directors plan to change the name of the Company to Azarga Metals Corp. and to consolidate the Company's shares on a 1 new for up to 10 old basis.

Management of the Company believes that the share consolidation is necessary and integral to implement its plans pursuant to the transactions outlined. There are currently 65,942,653 shares outstanding and if the consolidation of 1 new for 10 old is completed, there would be 6,594,265 common shares outstanding before closing of the Unkur Acquisition, the Private Placement and Debt Settlement common share issues.

To fund anticipated exploration, the Company will undertake a non-brokered Private Placement of a minimum of 20,000,000 post-consolidated shares at an issue price of C$0.10 per share. Subscription agreements have been executed for 15,000,000 shares and those funds will be received and held in escrow prior to closing. The Private Placement is conditional on completion of the successful completion of the Unkur Acquisition and Share Consolidation.

The Company may pay finder's fees within the allowable limits of the policies of the Exchange.

The Company has reached settlement agreements with certain current and past related parties to fully settle an aggregate of C$550,104 debt recorded in the books of the Company by a write-off of C$490,791 of those debts, approximately 89%, and the issue of an aggregate of 593,131 post-consolidated common shares at C$0.10 per share for the remainder of $59,313.

POST-COMPLETION BOARD AND MANAGEMENT CHANGES

On closing the Unkur Acquisition, Dorian (Dusty) Nicol will remain as a director and President and CEO to lead the Company into its next evolution and Michael Hopley will remain as a director. On 29 February 2016, Doris Meyer was appointed to the role of Chief Financial Officer in addition to her role as Corporate Secretary. She will remain in both roles on closing. However, two of EUU's current directors, David Montgomery and David (Sam) Hutchins, will resign to be replaced by two Azarga Metals' nominees. Subject to Exchange approval, the two proposed new directors are:


It is anticipated Mr. Molyneux will be appointed Non-Executive Chairman of the Company.

The Company wishes its departing directors all the best and thanks them for their many years of combined service. It also believes the management structure will combine the right mix of keeping overheads low whilst employing the expertise to succeed in Russia and with the Unkur Project specifically.

The following table sets out the indicative pro-forma share structure for the Company after all of the transactions are completed.